10 reasons that make Ikaria the island of longevity

An interesting article of Euronews recently discussed the reasons that make Icarians live longer and healthier lives than the average population of the world. Let's see what things the islanders do differently!

Icarians outlive Europeans, Americans and basically all the rest of the world's population and now they even have scientific data to prove it. The so-called "Study of Ikaria ", which was conducted by the Medical School of the University of Athens and was published in the "Cardiology Research and Study" journal, shows that Icarians are four times more likely to reach the age of 90 compared to the average American.

So what is the secret of the people of Ikaria?

Icarians don't go to the gym but regularly exercise in their natural environment instead. Agriculture is their main activity and in order to do the jobs done they constantly have to walk on trails to reach their fields, tend to their plants or animals. Thus moving is a central part of their daily lives.

The Study of Ikaria concluded that moderate physical activity of Icarians over 80 helps to reduce the likelihood of developing cardiovascular disease by 54%. Furthermore, it is associated with decreased incidence of Type 2 diabetes and increased levels of "good" HDL cholesterol. Moreover, this kind of activity has nearly eliminated dementia and depression on the island.

Ready to make a move? Check out our hiking and trekking programs in Ikaria!

Although Icarians work too, stress is just not part of their jobs. They stay awake until late at night, sleep until late morning, do some work, and almost always take a siesta, a habit that protects them against heart disease. Furthermore, seeing anyone wearing a watch is a rare phenomenon. A rigorous program or schedule is something foreign to the loose and laid-back Icarian lifestyle.

What could possibly be a more ideal place to relax than on the beach? Read more about our beach tours in Ikaria!

It has been already said that farming is the main activity for Icarians, so they know its secrets very well. They produce and consume their own products from their kitchen garden so every house in Ikaria has a table filled with local vegetables, pulses and all kinds of fruits.

Are you up to getting into agriculture during your holidays? Try your skills during harvesting or a natural soap-making workshop in Ikaria!

4. The Icarian herbs are medicine

Having mentioned home gardens it would be wrong not to mention the world famous endemic herbs of Ikaria. Each has its own separate utility. If your stomach is upset, a concoction of marjoram works the best. Dandelion improves the health of your liver, it is also a perfect natural diuretic while it curbs blood pressure. Sage keeps sugar levels low. Mint is considered one of the best antioxidants while it helps digestive functions and also helps prevent allergies and cold. And the list goes on and on and on.

Would you like to get to know about edible greens and herbs that can be found on the island? Join our harvesting activity in Ikaria!

5. Keep your friends close and the wine even closer

Socialization is another aspect of the Icarian lifestyle which is usually combined with a sip or rather several sips of wine. Getting together with friends and share some wine is a daily habit here. Icarians are not drinkers, but they are not moderate either, somewhere in between. They enjoy combining the laid-back lifestyle with their famous local product, that is rich in antioxidants and reduces blood pressure.

Get a taste of Icarian wines and learn about traditional ways of wine making and grape varieties during our winery tour!

6. The Mediterranean diet is a key to the door of health 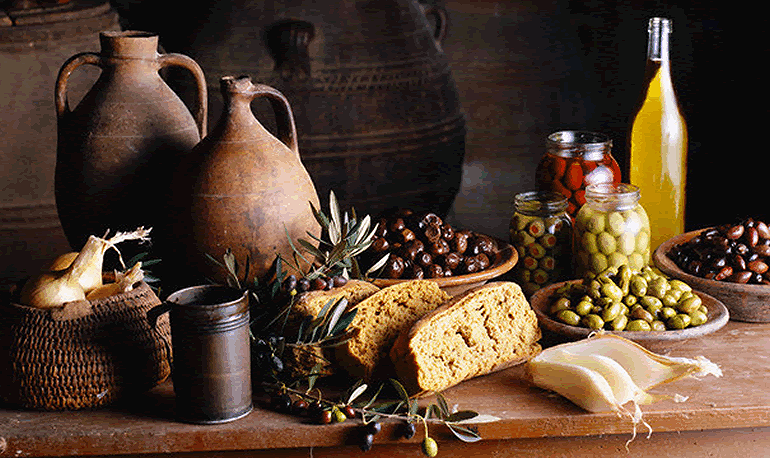 Icarians are role models for their eating habits. For starters, they refrain from overeating. Some of the key elements of their meals have been reported, but the residents of Ikaria have upgraded the Mediterranean diet. In short, eat lots of green vegetables, olive oil, tomatoes, beans and all without treatment, after all these are coming from their own fields. The main source of protein for them is fish, which, according to the Study of Ikaria, protects the kidneys. On the other hand, Icarians don't eat much meat. Instead, each family slaughters an animal a year, dividing into portions that arrive for weeks or even months. As for dairy products, Icarians prefer milk exclusively from their own goats, choosing to abstain from the consumption of saturated fats.

Learn how to cook healthy Icarian dishes during our cooking lessons and pie-making workshops!

A typical breakfast in the large urban centers would be instant coffee, accompanied with the unfortunately necessary for many cigarette. Ikaria things are completely different. The Ikarians are fanatical fans of the traditional Greek coffee, mainly for three reasons. Firstly, the Greek seems to Ikaria, after baking wants his time. Secondly, a "luxury" associated with the very popular "rachati" feature loose life. Thirdly, another finding of Ikaria Study is the association of Greek coffee consumption by improving endothelial function and consequently the health of the heart.

The same study concluded that one of the Ikarian qualitative longevity factors are quitting . 82% of elderly Ikarioton declare former smokers.

Honey is one of the most valuable local goods Ikaria. There are even endemic honey types that help to treat wounds up to resolve the consequences of intoxication (hangover). The average Ikarians starts his day with a spoonful of honey , which either swallow like medicine or is spreaded over their famous whole bread.

Do you want to taste different types of Icarian honey and learn about beekeeping? Join us on a visit to a local beekeeper in Ikaria!

Ikaria has long been famous for its thermal springs in the southeastern and northeastern track. The water temperature there is between 31 and 58 degrees Celsius, which has been known since the first century B.C. and is justified by the high presence of radon element. Some even consider the emitted radiation as number 1 cause of longevity of Icarians.

Let's take you for a visit to the thermal spas of Ikaria so you can also enjoy the healing properties of its natural waters.

9. Icarians live longer because their life is a celebration

Besides longevity, Ikaria is famous for its festivals. Though some may argue that this is only a summer activity, you should probably reconsider. Ikaria conducts over 80 festivals throughout the year, between January and the Feast of St. John the Baptist in the Proespera Backs up one of the Archangels in November in St. Kirikos Plomari. Locals participate in every possible way, even taking advantage of an opportunity to celebrate their lives.

Put on your dancing shoes and join us on one of the village festivals (panigiria) in Ikaria!

Last but not least. The Icarians between 65 and 99 years who participated in the Study of Ikaria completed a sexual activity questionnaire which yielded remarkable responses. 60% said at least " moderate confidence " during sexual intercourse. Moreover, according to a preliminary study in Ikaria between 65 and 100 years 80% of them said they often engage in sexual activity, and 25 % reported " good length " and " integration".

When you combine this with the fact that they live in an almost heavenly island, can understand the extra motivation they have to live a long and quality life.

Holiday in Ikaria Island with alternative programs and activities

Ikaria beaches: a guide for your vacations in Ikaria

Top 5 things to do Ikaria